Home of the Wheels of Wisdom cycling podcast

Wild camping in Burgundy – a microadventure

Ah, camping, so many memories… Terrible memories that is.

As a boy, I was made to trudge across Dartmoor in my Navy Combined Cadet Force (CCF) outfit in various character-building winter exercises, armed with a compass, a tent and raw vegetables. Nature provided cold, wet and foggy misery to aid the sleepless nights.

One particular memory sticks in my mind. To reach the final point on the Ordinance Survey map, we needed to cross a river. No raging torrent, but deep enough to get your boots wet. Being an enterprising soul, I spotted a fallen tree and proposed making a makeshift bridge to our Officer (teacher). I was told that the goal was to get your boots wet and have the character-building experience of marching the final miles with sodden boots.

That night I resolved that my days of camping and indeed CCF were numbered. Indeed over 20 years later, I had kept my vow.

The romance of wild camping

As an adult who spends the bulk of his time sitting in an office or pedalling between it and home, the outdoors holds a strong romantic appeal.

On my days off, I’m usually found disappearing into the countryside getting lost on a bicycle somewhere in the south east of England. On my weekends, I’m usually found studying Google Maps for an as yet unwalked area of wilderness reachable and back by the kids’ bedtime.

Having spent many happy days enjoying the company of the bon vivant, The Hungry Cyclist, a partner in crime for some of my pedalled adventures, the idea of slaying my childhood camping demons took hold. If he can manage nearly three years camping across the globe, then surely I could manage a night or two’s discomfort?

Then I discovered the laudable campaign from explorer Alistair Humphreys whose concept of the microadventure saw him nominated as National Geographic’s Explorer of the Year in 2012.

This struck a chord with me as it has now with thousands of others who enjoy pushing at the edge of their boundaries, but who do indeed have solid boundaries – mortgages, children, jobs – that prevent them from rowing the Atlantic, visiting the poles or cycling the world (although you still can…).

And so, a visit to the Hungry Cyclist’s lodge in Burgundy provided the opportunity to exercise or exorcise the romance of wild camping.

I was asked what I would like to do for the week: ‘Well, I’d like to do a microadventure.’

And knowing the man himself, he’d make sure we went through with it.

Wild camping on a hillside somewhere in Burgundy

The wine maker Nicholas Harbour came over of an evening and as the wine flowed discussion turned to the pending camping trip. Nicholas it transpired was a veteran camper whose eyes lit up as we shared our plans and two became three.

We picked a warm night. Why not?

We brought a fine bottle of wine. Pourquoi pas?

I borrowed a sleeping bag from a friend of Nicholas, packed my laptop bag with warm clothes, plates and condiments and at the end of a hard day’s work on the Lodge we set off for one of the hills that overlooked the valley.

We walked through the vineyards as the sun started to set and the vibrant colours of twilight lit up the scene. Off to the distance, a path led up the valley, but we decided to do a little climbing and scrambling to find Route One to the top.

The two veteran campers debated the optimum camp site as I went in search of firewood. There on the hilltop amid the trees and thorny bushes, I found an old Celtic fort with clear man-made stone walls that had survived the centuries.

The others carefully set up the fire building up layers of stones to protect against the fire spreading and to provide a base for the grill that Nicholas had brought to cook the star of the show – a world-famous Charolais steak. Cold beans in Burgundy just wasn’t going to cut it.

We sat on the hilltop as the sun disappeared down the valley taking in an incredible view over some of the most famous wine villages in the world on a perfect cloudless evening.

As the fire settled and night fell, the full moon revealed itself in all its glory in a star-filled sky and I made a toast to the ghost of camping past. 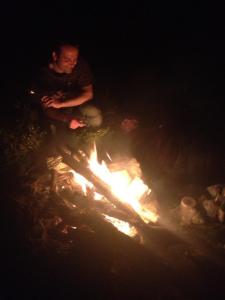 The night falls and morning breaks

We tucked into our sleeping bags close to the fire to settle in for the night. The long grass made for a comfy if uneven mattress, but a glass or two of fine wine and the lateness of the hour soon sent us to sleep.

I was awoken at some god-forbidden hour by a gentle drizzle on my face, but just shuffled my hoodie over to cover my face and settled back down hoping that proper rain would not follow. It didn’t.

As dawn broke we slowly stirred back to life and breakfasted on the remaining potatoes left in the embers of the fire. Quiet and tired, but calm and happy.

There’s something magical about dawn that shakes off the tiredness of a short night’s sleep. The stillness, the ethereal light and just the feeling that you’re the only souls moving about at that hour.

We covered up the fire site, picked up our possessions and slowly made our way back down the hillside, pausing to refresh with a splash of water from a church fountain in the village.

The ghost of camping past was finally laid to rest. 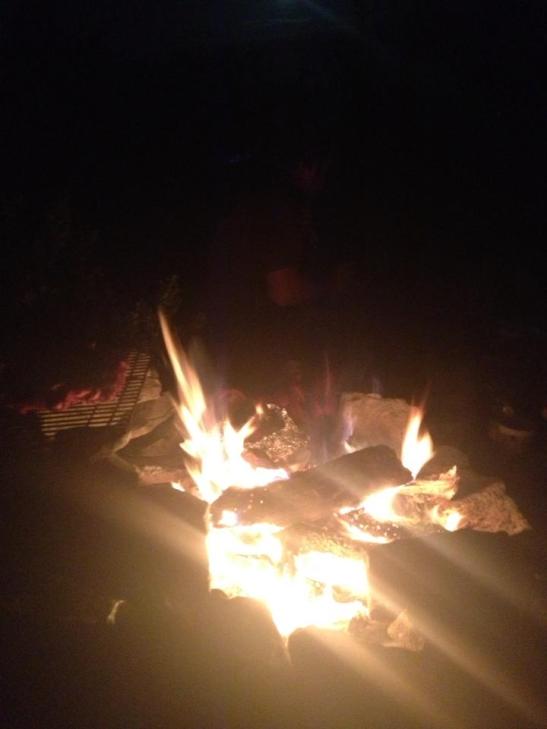 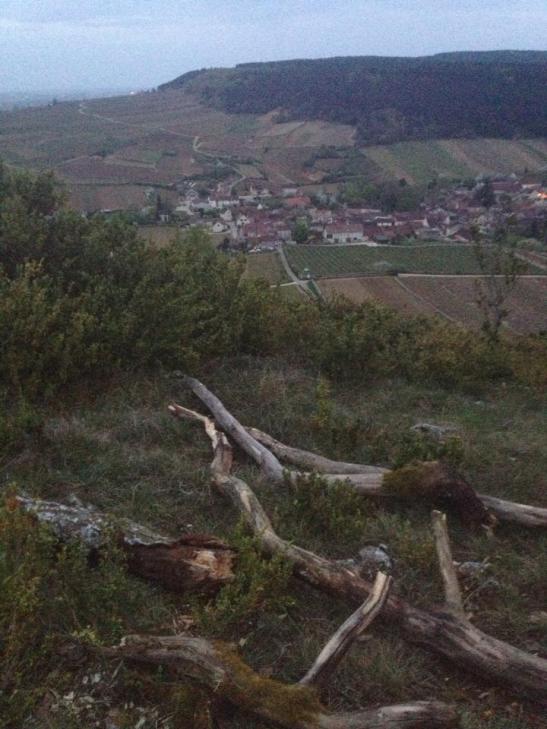 One comment on “Wild camping in Burgundy – a microadventure”