Home of the Wheels of Wisdom cycling podcast

Climbing the highest point in Surrey 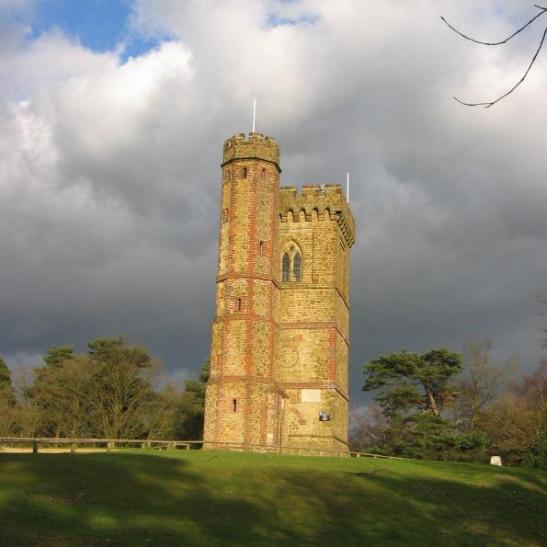 After the relative molehills of south-eastern England, it’s time to climb the highest of them all in the region, Surrey and Leith Hill.

How to find it

If you’re just interested in how to find the highest point in Surrey and not the story of the journey, then this section is for you.

It’s a bright and breezy afternoon and to keep the boys motivated we’re bringing the most portable of sporting accessories, the football.

It’s a wonderful winding, tree-lined road a short drive from Dorking and as so often it seems, the venerable institution that is the National Trust has placed a handy car park nearby for those on four wheels dreaming of being on two.

There’s a clearly marked path to the top and a focal point at the top with Leith Tower to complement the wonderful views across the counties from the top of the hill.

It’s a steep but accessible path towards the 18th century tower that marks the south-east of England’s highest point at 295 metres, our first top twenty hill in our ambition to climb the highest point in each English county.

Leith Hill Tower was built back in 1765 and was built in part to increase the height of the hill to over 1000 feet.

The sun is now only sneaking through the clouds fitfully as the wind increases with altitude.

Near the top it strikes me that I don’t have any money on me. None for a drink and a treat at the top to trump the water bottle I’m carrying and I worry that the tower will be paid access only.

It is. How can we claim to have scaled the highest point if we can’t get in it, particularly after I’ve been promising the boys a trip to the top of the tower.

I ask the lady at the foot of the tower if they take cards. Of course they don’t.

I slump away from the queue and break the news to the boys who nod, disappointed.

The rain starts to fall and the boys are getting restless while we decide what to do.

Then a lady approaches us. What follows is a very English exchange as I refuse to accept the money and she refuses my refusal. Stalemate.

She wins the argument by placing a five pound note in my eldest’s hand. I’m genuinely touched by the lady’s kindness.

And so we return to the lady in the tower and awkwardly hand over the money as the rain starts in earnest. I send my eldest to chase after the lady and return the change with a thank you and wave to her as he hands it over beaming.

We climb to the top and it feels like we’ve stepped into a gale. The boys won’t even pose for the photo opportunity leaving me to grab a few hasty, terrible snaps of a grey, windswept view.

I want to savour the moment so stay a while getting buffeted by the elements and wondering how spectacular the view would be on another day.

After a few minutes, even I’ve had enough and I head back down and find the boys chasing each other up and down the stairs weaving in and out of the growing numbers sheltering in the tower from the rain.

We brave the rain for the highest game of football in our lives.

Views – 3/5 teddies. Even on a windswept day, it’s still spectactular and might even earn a coveted 5 teddy score on a clear day.

Ascent – 2 teddies from the car park, but a tricky 4 if you decide to cycle up the winding hills to the car park.

This entry was posted on January 25, 2014 by Chris in challenges, kids.